The mention of Piet van Asch in the blog on ZK-PVB at http://nzcivair.blogspot.com/2010/06/rockwell-commander-in-christchurch-town.html reminded me of one of his earlier aircraft. The Beechcraft AT-11-BH Kansan ZK-AHO , c/n 3691 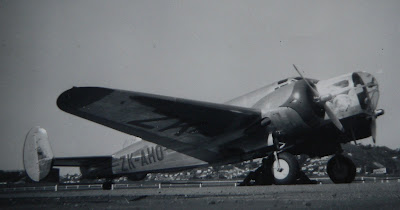 , was built for the United States Army Air Force and allocated the serial 42-37208. It had a date of manufacture of 05-04-1943 and was test flown on 12-04-1943. This flight ended with a wheels up landing at Wichita, Kansas.
It was shipped to New Zealand during August of 1943 having been sold to the NZ Government for 13,000 pounds. Assembled at Hobsonville and modified by Union Airways for survey duties at Palmerston North.
It served well with N Z Aerial Mapping Ltd based out of Bridge Pa at Hastings until being withdrawn from use on 31-12-1980. From late 1963 onward it had been assisted by the Aero Commander 680F ZK-CDK. AHO was flown from Hastings to Hobsonville on 19-01-1982 for delivery to the MoTaT where it can be seen to this day. Its registration being cancelled on 16-06-1988.
The top photo was taken at Wellington on a lovely day in October of 1963 (note the crew busy at the stbd undercarriage).
Second view below shows off the navigators nose position, which was the main difference between the AT-11 Kansan and the standard Beech 18. 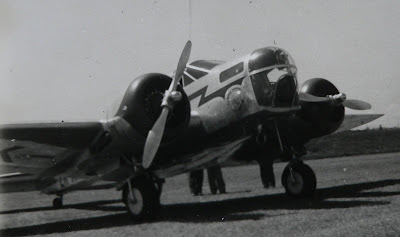 Colour, from memory was bare metal with red trim, with a large NZAM logo on the nose, and the "Beechcraft" logo on the fins. 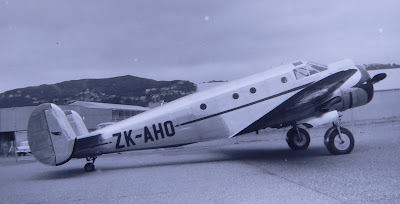 The last two shots (with no apology for the light across the lower shot) were also at Wellington, but on 30-01-1973.
By this time the aircraft was mainly white. 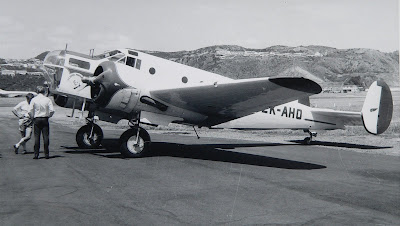 This aircraft was off course preceeded at NZAM by the General Aircraft Monospar ST 25 ZK-AFF, which was destroyed in a hangar fire on 26-06-86.