Another classic aircraft out in the sun at Ardmore last Monday was Ryan ST-M S2 ZK-BEM (c/n 489).  It has a very long and interesting history. 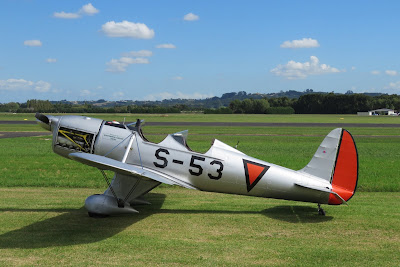 It is painted in the colours it wore with the Netherlands East Indies military in 1941 where it operated for at least some time on floats.  The NEI had ordered a total of 108 ST-M aircraft which were delivered in 1941 but in March 1942 the Japanese invaded the island of Java and destroyed many of them.  However, 34 of the aircraft managed to escape the destruction and were hastily shipped to Australia where they entered service with the RAAF.  S-53 (c/n 489) was one of these aircraft and it was bought on charge with the RAAF in June 1942 as A50-13.

Following the end of the war it was purchased by Brown and Dureau Pty Ltd of Melbourne and registered VH-AGS.  A succession of Australian owners ensued with it being struck off the register several times but then restored.  One of these times was when it was involved in a mid-air collision with a Tiger Moth at Albury, NSW, which necessitated the rear fuselage being replaced. Finally it ended up with James Whiteman of Sydney on 30/11/53, who named the aircraft Rebel II. 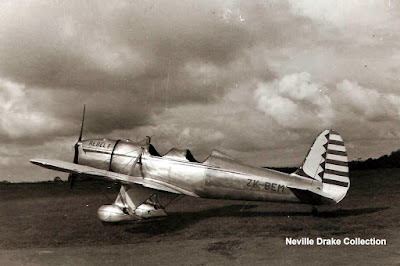 James Whiteman shipped the aircraft to Auckland where it arrived in May 1954.  It first flew here as VH-AGS as it was involved in a forced landing on Takapuna Beach still wearing its Australian registration on 17/5/54  The forced landing was caused by an engine failure while being flown by James Whiteman.  A replacement Menasco engine was sent from Australia and was installed by engineers at the Auckland Aero Club at Mangere.  It was cancelled from the Australian register on 25/5/54 and appeared on the New Zealand register as ZK-BEM on 14/9/55, still owned by James Whiteman and still named Rebel II as in the above undated photo. 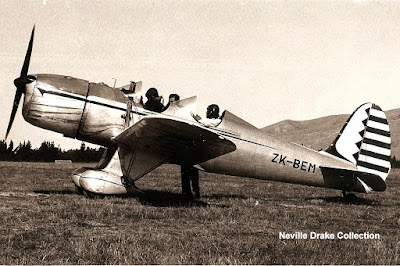 Soon after being registered in New Zealand, on 15 /10/55, it was purchased by Alex H Blechynden of Matamata who was the Chief Flying Instructor of the Piako Aero Club at that time.  Further ownership changes saw ZK-BEM being owned by CD Price of Auckland from 11/8/58, and later by C Fry of Auckland, then by J Tuohey of Auckland from 1/9/60. 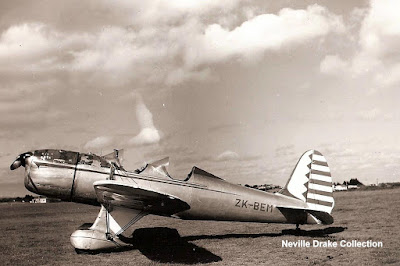 As can be seen by this photo, the aircraft was looking a bit worse for wear in the paint department.  It was eventually retired to a hangar at Ardmore over the period 1960 to 1967 needing extensive repairs.  During this time it passed through several more owners, including P Sheffield of Clevedon from 2/4/62 and later in 1962 by Clem O'Neill, then in 1963 by Miss KN Quinn of Papakura and finally by Kerry Newman.  He cancelled ZK-BEM from the register on 19/7/67 and donated the by now derelict aircraft to MOTAT, with a proviso that it be restored to flying condition.  It was later restored to static display by MOTAT 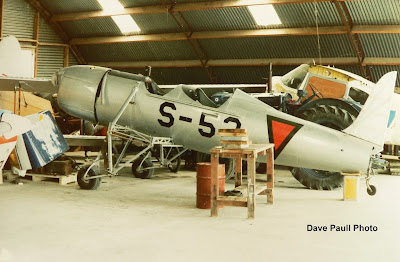 By 1985 the aircraft was undergoing restoration at North Shore as shown in the above photo taken on 5/1/85.

In 1994 an agreement was made between MOTAT and the New Zealand Warbirds Association for the Association to restore the aircraft to flying status in return for exclusive use of it for 10 years.  ZK-BEM was re-registered on 19/11/98 to the Ryan Syndicate of the NZ Warbirds Association, and it was test flown on 13/12/98 by the Warbirds President Trevor (TT) Bland.  The aircraft suffered major engine damage and was forced to make an emergency landing on the Clevedon Polo Field on 29/8/04 after which it languished again until funds were raised for a replacement LOM Prague M332A engine with which it flew again in March 2012.