Reader David Eyre recently photo'd this Nieuport 24 bis replica on display at The Aviation Heritage Centre at Omaka, which is marked N 1895 on the tail.  He wanted to know what its ZK registration was. 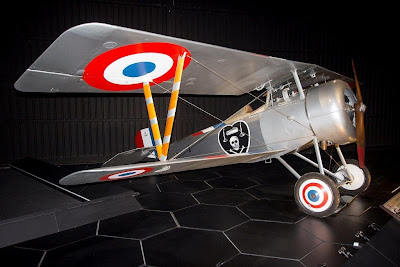 This got me referring back to a series of posts that I did in 2009 in which there was some confusion about which Nieuport was which, of the 2 aircraft below. 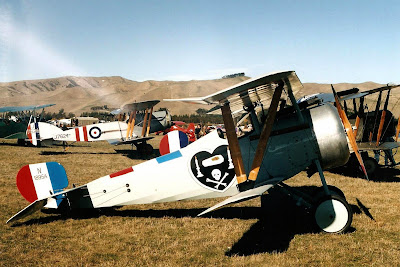 However, after further investigation, I am now pretty sure the this aircraft and the one that David Eyre photo'd above is in fact ZK-NIE (2).  Part of the reason for this is that ZK-NIE (2) is still registered to The Vintage Aviator.

This aircraft is painted to represent the Nieuport 24 bis flown by the French WW1 ace Charles Nungesser.  He flew several Nieuport models all painted the same with his insignia of the skull and cross bones and a coffin and funerary candles in a black heart, and with the number N 1895 on the tail. 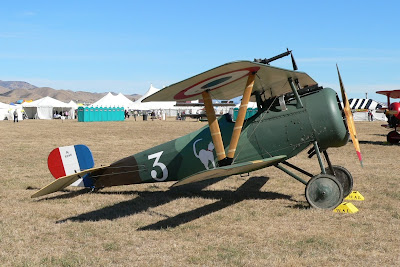 And I am now also pretty sure that this aircraft above was ZK-JOZ.  ZK-JOZ was cancelled from the New Zealand civil register in September 2007, and it was returned to the US as N 5246.  This was the plane which was tragically lost in an accident at Old Rhinebeck, NY on 17 August 2008.  Flyernzl has come up with a link to this accident at  http://fotodj.com/subsites/gone_west/slides/080720_006.html

I trust that this clears up any confusion!