Rutan Long Eze ZK-LET was built by Chris Hoskins (who also built Long Eze ZK-LEZ), at Tauranga for Grant Nicholls, and it was first registered on 12/11/01. I reckon that it must be the most transformed homebuilt aircraft in New Zealand, and as can be seen below - it is now a jet!! It is therefore our first homebuilt jet aircraft. 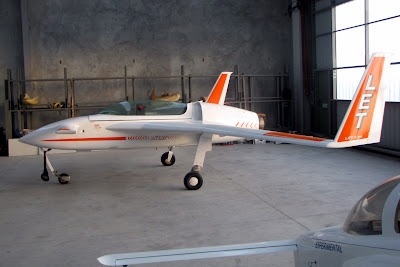 I was very surprised to see ZK-LET in its latest jet transformation in Grant Nicholl's hangar at Tauranga on 10 July. I think the jet engine is out of a drone, and it produces 1,000 pounds of thrust in its current form. Later a reduction cone will be bolted on to the jet nozzle which Grant said will provide 2,000 pounds of thrust! It has flown three times to date.

There was also an amazing collection of other homebuilt aircraft in Grant's hangar: Seawork's Seawind amphibian ZK-SWK, Harry Harris' microlight Spitfire replica ZK-JNM, Grant's other aircraft: Bede BD 5B ZK-XBD, Q 200 ZK-FWF being worked on, and as can be seen in the foreground of the photo: Russel Borman's Puffer Cozy ZK-COZ. 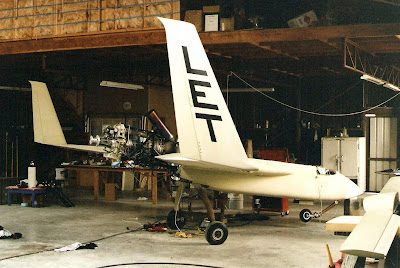 I first photo'd ZK-LET in Chris Hoskin's hangar at Tauranga in mid 2002. As can be seen it first appeared with a turbine engine. This engine was from an auxillary power unit. It would therefore have also been our first homebuilt turboprop aircraft. Grant told me that it did many low level hops along the runway at Tauranga, and also did 2 longer flights. Unfortunately it suffered from engine control problems and so it was back to the drawing board. 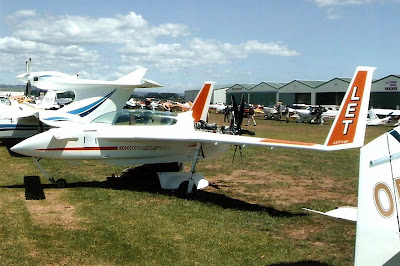 It next appeared with a very powerful Mazda rotary engine and a 6 bladed propellor, as seen here at the 2006 SANZ flyin at Tauranga. By this time it had also been fitted with a retractable undercarriage. Grant told me that it flew around 60 hours in this configuration and was very successful. Grant has both the turboprop engine and the Mazda rotary engine in his hangar ready for fitting to other aircraft in time - watch this space!
Posted by Sir Minty at 19:54